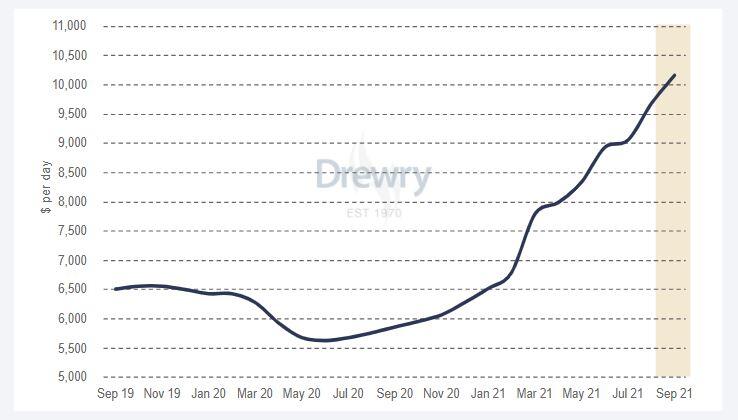 The Drewry Multipurpose Time Charter Index increased to $9,679 per day in August, representing a rise of almost 7% compared to the 1.4% rise seen in the previous month, as the usual summer lull came to an abrupt end.

The slower rate of growth exhibited by the MPV Index over July was largely due to a softening in the market for smaller, less heavylift capable vessels. It should be noted that this Index is a weighted average of the two main sectors and the weaker (less heavylift capable) sector has adversely affected the Index over the last two months.

However this year’s summer lull was particularly short-lived for the shortsea market and by the second half of the month we were already starting to see a pickup in demand, particularly in the Mediterranean and Black Sea ports. This resulted in an uplift of around 1.5% in rates for the smaller vessels in the fleet over August.

Meanwhile the project carrier and heavylift capable vessels continued to enjoy a rising market. Vessel availability was scarce, as the majority of ships have been fixed well into 2H21, and demand continued to climb as the capacity constraints and equipment shortages continued in the competing sectors, making these vessels the go-to choice for a number of shippers, with charter rate growth for this vessel type of over 10% month-on-month.

Drewry does not expect the supply – demand balance to change significantly in the short-term, leading to further growth in charter rates and a rising Index into September.