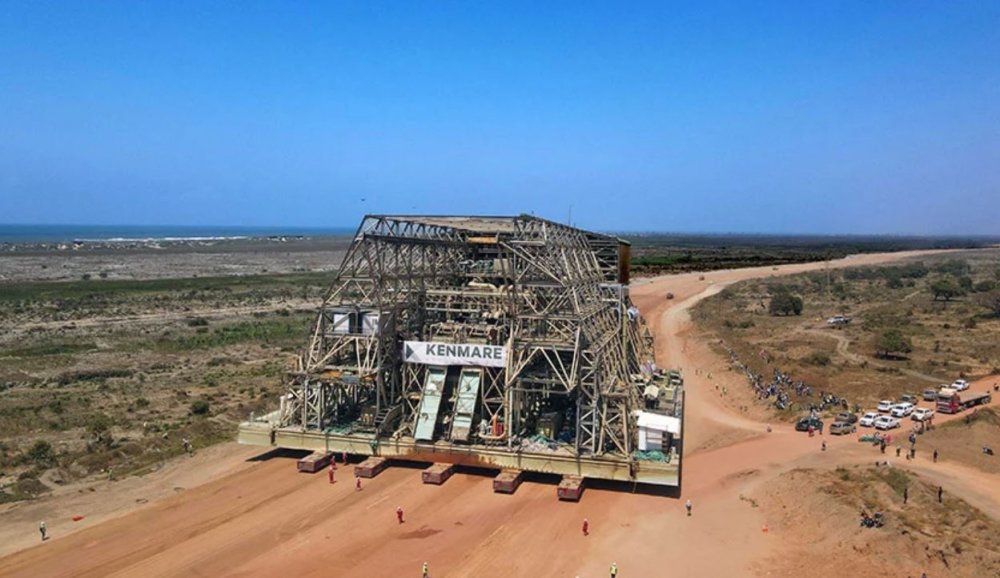 Mammoet has safely relocated Kenmare Resources plc’s mining plant from its previous mining area at Namalope to Pilivili, a new high-grade ore zone at the Moma Mine, in Mozambique.

The transport consisted of a Wet Concentrator Plant (known as WCP B) and its dredge. It is the heaviest piece of mining equipment to be moved in Africa, to date. With 290 axles required to lift and transport the WCP B-unit, the move also represented the most SPMT axles used in Africa to date and one of the largest moves of a single piece of mining equipment in the world.

Having considered numerous options, it was chosen to move these assets intact and by road, as this was the lowest-risk option and limited the time out of production. Disassembling and reassembling the plant would have taken significantly longer and transporting the plant by sea barge may well have resulted in substantial delays – as a significant period of forecasted calm seas would be needed for this option.  Mammoet engineers were able to provide a safe and effective solution to load, move and unload the plant in one piece. First, the plant was floated into an excavated starter pond and placed on constructed concrete plinths. The pond was then drained, allowing 290 axle lines of SPMTs (in 5 x 58 configuration) to be positioned underneath the plant, before it was moved along a 23km long, purpose-built road with a weight-bearing capacity of 8.4 t/m2, to its new location.

In Pilivili, the operation was completed in reverse: the plant was positioned on top of concrete plinths and then pond around it was flooded, which allowed the plant and the dredge to float to their new mining position.

WCP B weighs approximately 7,100 tonnes, including ballast, and measures 80 meters long, 60 meters wide and 24 meters high. The move was particularly unusual due to the combination of the weight of the load and the length of the distance travelled. Commenting on the move Michael Carvill, Managing Director Kenmare Resources plc, said: “Moving the plant in one piece, an object weighing the equivalent of 550 double-decker buses, taller than a seven-story building and wider than a football pitch, is a huge achievement for our company.” “This type of relocation is rare in the mining industry, but it was the clear choice for Kenmare given the economic benefits and lower risk profile it provided, compared to the alternatives we considered. I would like to extend my congratulations and thanks to the Kenmare team on site and our specialist contractors for completing this record-breaking task safely and overcoming many challenges as a result of COVID-19.”  Heavy mineral concentrate production from WCP B at Pilivili is expected to begin in mid-Q4 2020. The relocation of WCP B and its dredge form the third and final project of Kenmare’s development program to increase Moma’s ilmenite production to 1.2 million tonnes (plus co-products) on a sustainable basis from 2021.

G2 Ocean expands its office network to the Middle East

Fracht completes a challenging delivery of an 80-tonne transformer