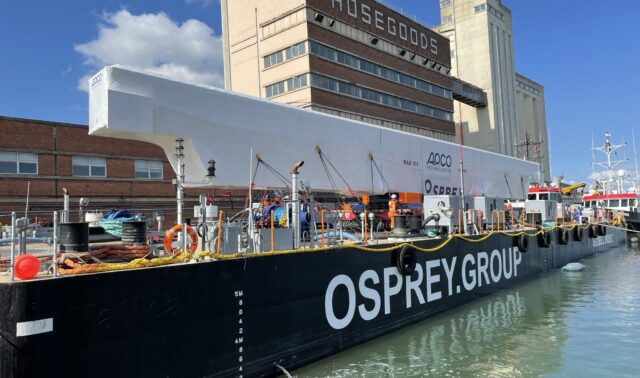 Many specialist logistics’ milestones have been reached already in the construction of Hinkley Point C (HPC), not least the delivery of the Polar Crane Electrical Girder Beam: its installation in the reactor building will take place 6 months after build-up.

This critical asset is a milestone. The Polar Crane Main Beams measure up to 44.77 metres long, with the larger of the two weighing 138,000 kilos. To manufacture, move, and install each beam with the greatest of care has required collaboration across the supply chain, with input from a range of key partners such as APCO, NATCO, and our own Heavy Lift teams here at Osprey.

The Polar Crane Beams will be pivotal to the function and safety of the nuclear reactor during the entirety of its 60-year operating life. During the current construction phase, the beams will also play a crucial role in the installation of the Reactor Pressure Vessel itself and other components of the nuclear steam supply system. These aren’t assets that can be bought off the shelf, they’re bespoke to HPC, so every millimetre of movement is carefully orchestrated and signed off by a team of engineers, transport, and safety specialists.

The transportation of the first beam from Avonmouth to the HPC site is complex. Many environmental factors had to be considered: the weather, marine parameters such as tidal conditions in the Bristol Channel and river conditions in the River Parrett as well as access into EDF’s marine facility at Combwich Wharf, including planning constraints for barge arrivals and considerations towards local residents.

To move the Polar Crane Beam across the site, the team loaded it onto a specialist, four-file 10-axle self-propelled modular transporters (SPMT): progress at the right pace is critical to ensuring its integrity and the safety of everyone involved, and this SPMT moved at less than 3 miles per hour during transit, and under fine control during final positioning for unload onto storage supports using the SPMT hydraulics at the construction platform.

Kuehne+Nagel teams up with Lenovo to reduce their carbon footprint