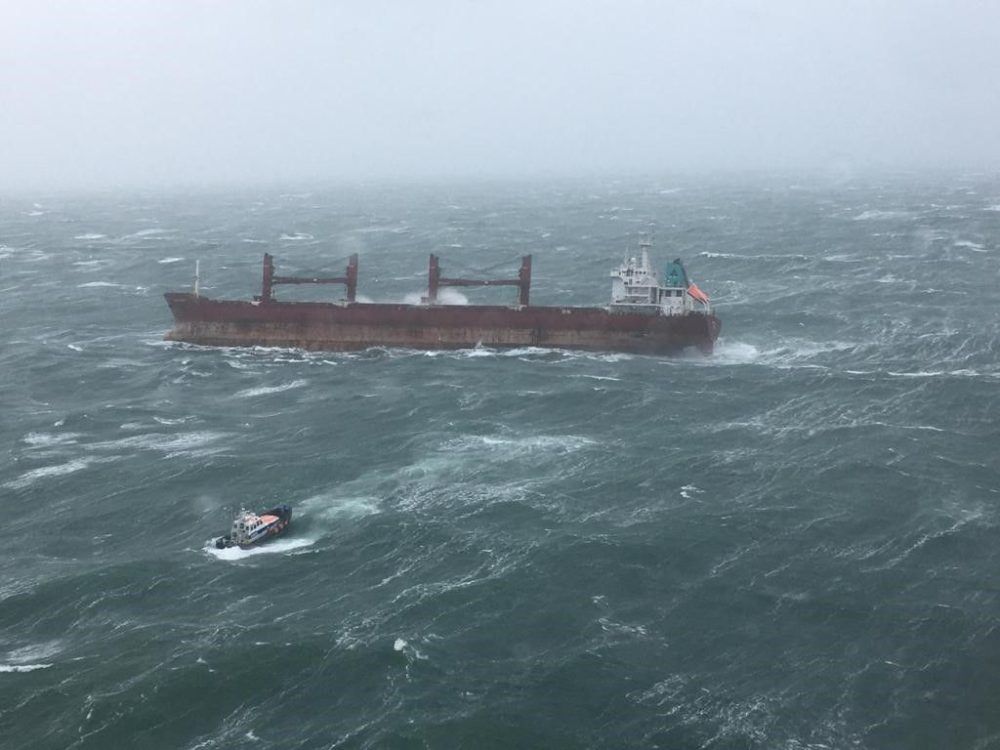 Boskalis has successfully salvaged the rudderless cargo vessel Julietta D off the Dutch coast. The vessel ran into trouble during Monday’s Storm Corrie. The Julietta D was anchored off the coast of IJmuiden (the Netherlands) but got into difficulty when its anchor chain broke, causing it to collide with another ship.

After the collision, the Julietta D was taking on water and the crew members were evacuated by helicopter. The ship then drifted towards the coast of Scheveningen and collided with an offshore platform.

The Sovereign, a large Boskalis tug, arrived on the scene yesterday at around 16:00 hours CET, followed soon afterwards by four salvors from Boskalis’ salvage division, SMIT Salvage, who were airlifted onto the Julietta D by helicopter.

At around 18:30 hours the first successful towing connection was made, preventing the vessel from running aground on the Dutch coast. The Julietta D was then pulled further out to sea as a precaution, waiting for an additional tug. At around 19:00 hours, the tug Multratug 18 of partner Multraship also made a towing connection, but due to the very rough conditions this connection unfortunately had to be severed. Today at around 01:00 hours the Manta, a second large Boskalis tug, loaded with salvage equipment and an additional team of salvors was on site, after which a second towing connection was successfully made after sunrise. This secured the Julietta D and the vessel is currently being towed to the port of Rotterdam where it is expected to arrive early in the afternoon.

“In addition to its own staff on board the tugs and Julietta D, Boskalis would also like to thank its partner Multraship, the Dutch Coast Guard and its helicopter crews, The Royal Netherlands Sea Rescue Institution and its crews of the search and rescue vessels, and the Port of Rotterdam.”

NHV are proud of their Search and Rescue teams in Pistoolhaven and Den Helder, who were involved in rescuing the18 survivors.

“Our teams deployed 3 AS365 aircraft and all survivors were brought safely to Schiphol airport.”

Subsequently, NHV dropped off a recovery team to the Julietta D Vessel to establish a towing connection for Boskalis.

“We flew a second salvage team and two shipping pilots to the Julietta D together with the towing vessel – Sovereign, allowing the ship to be safely towed to Rotterdam Harbour. Great Teamwork with 40SQN!”

G2 Ocean expands its office network to the Middle East