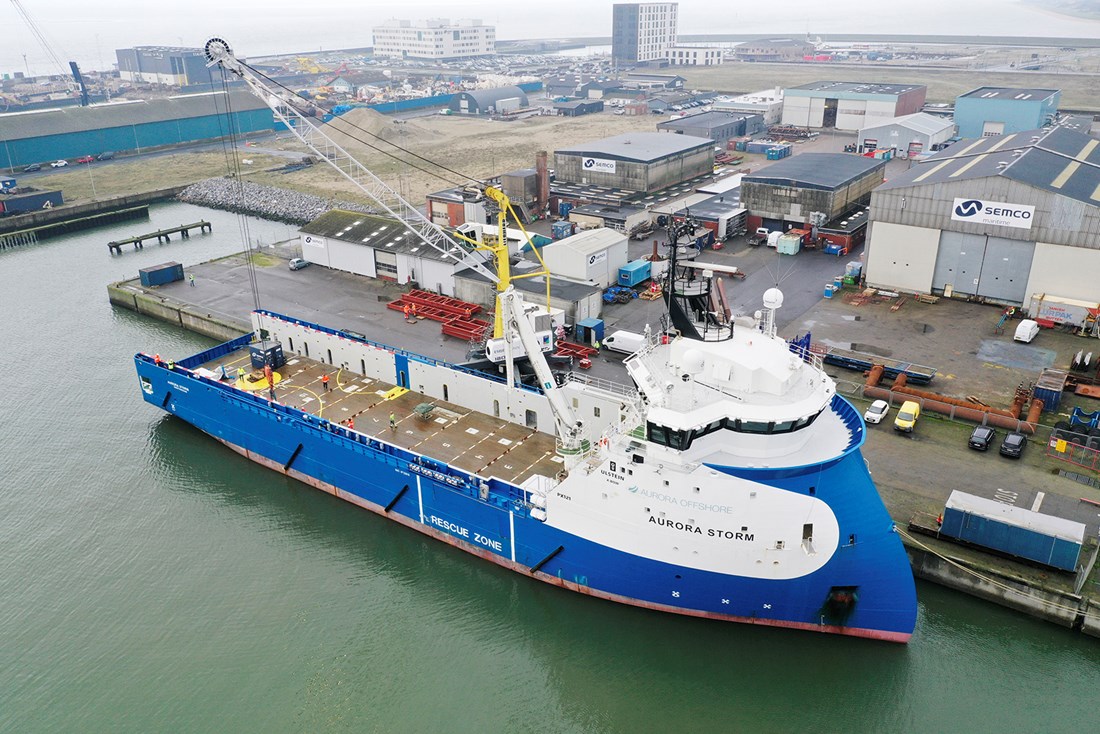 Blue Water and Semco Maritime are preparing the MV Aurora Storm, currently berthed in Esbjerg. Before long, it will be transporting containers with CO2 from Belgium to the North Sea, where the CO2 will be safely and permanently stored.

Crews from Blue Water and Semco Maritime are in the process of preparing the vessel MV Aurora Storm, poised to take a key role in Project Greensand. Aurora Storm will transport special containers filled with CO2 safely from Belgium to the Nini West platform in the North Sea. It happens as part of the advanced pilot project in Project Greensand which aims to deliver a significant contribution to the green transition in Denmark.

“In the coming weeks, we will work intensively on rebuilding and upgrading Aurora Storm, so we can safely transport the containers of liquid CO2 from Belgium to the Danish part of the North Sea without any problems. We will install a grilling system on the vessel with the frame structure ensuring that the containers stay in their position on the vessel when we sail from Antwerp to the North Sea”, says Søren G. Nielsen, Head of Chartering, Blue Water.

In addition to the so-called grilling system, the electrical systems on the MV Aurora Storm are also being upgraded. Piping and pumps are being added to the vessel enabling direct transmission of CO2 via the jack up rig Noble Resolve from containers aboard the Nini West platform and then down into the sandstone reservoir 1,800 metres below the seafloor of the North Sea, where the CO2 is stored safely and permanently.

“At Blue Water, we see great opportunities in Project Greensand. We are proud to be part of a project contributing to solutions in the green transition. Capture and storage of CO2 give new perspectives – regarding climate as well as business. It is a worthwhile project with strong business partners, and one of our goals is to gain important experience that can benefit Blue Water and Denmark in the future”, says Søren G. Nielsen.

MV Aurora Storm is a Platform Supply Vessel with a strong Dynamic Positioning System. The system ensures that the vessel can keep its position stable at sea, also under the difficult weather conditions that may arise in North Sea.

“It is crucial for Project Greensand’s pilot phase that we get the CO2 transported safely from Belgium to the North Sea. This allows us – as the first in Europe – to demonstrate the entire value chain in the capture and storage of CO2 with a view to making a difference to the climate. Aurora Storm is one of the last and most important pieces in the initial pilot phase in Project Greensand”, says Søren R. Poulsen, Project Director in Project Greensand.

MV Aurora Storm is berthed in Esbjerg for the next three to four weeks, after which the ship can sail towards Antwerp, where the containers with liquid CO2 are to be loaded.

“We are of course very satisfied that Aurora Storm is now being prepared at the harbour in Esbjerg. With safety first being paramount, we can demonstrate that CO2 can be stored in Denmark – and thereby make a significant contribution to the green transition”, says Søren R. Poulsen.

While the preparation of MV Aurora Storm is in full swing, intensive work is also being done to inspect, upgrade and optimise the offshore rig Noble Resolve, which, like Aurora Storm, has arrived at the Port of Esbjerg. Employees from Semco Maritime – another consortium member of Project Greensand – have selected and delivered equip-ment for both Aurora Storm and Noble Resolve, and they now play a key role in the preparation.

“We are excited that MV Aurora Storm and Noble Resolve have arrived in Esbjerg so that we can continue the work with Project Greensand. We have put intense work into designing and developing solutions for storing CO2 in the North Sea. We now enter the crucial phase where everything has to be installed before we can begin the work on the Nini field”, says Anders Benfeldt, Senior Vice President for Oil & Gas at Semco Maritime.

Thus, the final preparations on both vessel and offshore rig for Project Greensand are now underway before Pro-ject Greensand is scheduled to store up CO2 in the North Sea around the turn of the year.

The consortium behind Project Greensand consists of 23 Danish and international companies and organisations that are working hard at delivering a significant contribution to the green transition. In December 2021, the EUDP awarded Project Greenland DKK 197 million with a view to developing and demonstrating CO2 storage in the North Sea.